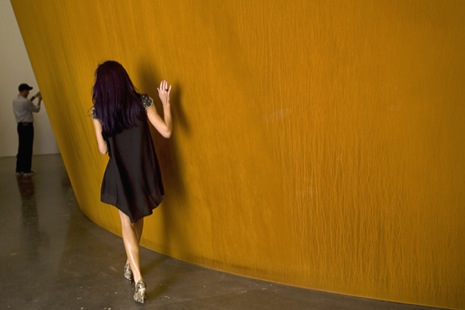 Today screen actress Edie Sedgwick was nearly killed when she tried to “experience” one of Richard Serra’s sculptures in the galleries here. The toppling sculpture pinned Sedgwick to the gallery floor. She survived only because the arc of the sculpture created a small crawl space between it and the floor which Sedgwick’s 98-pound anorexic body was able to fit in. Museum engineers brought industrial forklifts in to raise the sculpture off of Sedgwick’s body, however Serra was outraged and insisted that the sculpture should not be moved, claiming that it was a site-specific work and that by lifting the sculpture off of Sedgwick the Guggenheim would be destroying his work.

The Guggenheim elected to proceed with raising the sculpture and Sedgwick was removed with only minor cuts and bruises. It is unknown at this time whether Serra will allow the sculpture to remain at the Guggenheim or demand its removal since, per him, they have “destroyed his art.” However the nearby University of Deusto has offered to buy the sculpture in any condition so long as they can erect it on their campus and etch the names of failed Art History PhD candidates on the monolithic surface.

After her extraction from the sculpture a distraught Sedgwick explained,

I was just listening to the museum audio tour. It told me to feel Frank Gehry’s architecture, which I did. It felt really good. Since Gehry is an architect trying to be a sculptor, and Serra is a sculptor trying to be an architect, it only made sense for me to also feel Serra’s work and see if it felt as good as the Gehry. Obviously, it did not.